Direct-Source Background Screening Data vs. Vendor Management vs. W-2: Which Is Right for Your CRA?

Until recently, CRAs looking to build and maintain a data supply chain had two options: manage a network of regional vendors or employ their own salaried research teams. Now there is a third option. Here’s what this disruptive, new operating model looks like.

Thanks to the merger that formed InformData, CRAs can now partner with a single provider offering direct access to background screening data in nearly every jurisdiction in the United States.

By obliterating the need for layer upon layer of middlemen to create the data supply chain CRA’s depend on, InformData’s 100% direct-source data supply chain revolutionizes the way CRAs buy, specify and receive background screening data for their business. The direct-source model eliminates many of the frustrations and inefficiencies inherent in the traditional way background screening companies have done business.

(Our last article explains how direct-source data works and its multiple benefits.)

The modern CRA may choose to rely entirely on a direct-source data partner, a network of regional vendors, or W-2 employees, or they might combine the three methods to varying degrees.

In the following sections, we’ll examine the pros and cons of each path.

Over the past 20 years or so, most CRAs have developed background screening data vendor networks that often include dozens or even hundreds of entities acquiring data from local jurisdictions. Many of these vendors subcontract to other researchers to harvest the data.

The pros of vendor management for CRAs

The main draw of the vendor management approach is the comparative price. It wouldn’t make financial sense for most smaller CRAs to maintain a staff of researchers for every county they cover. Vendors, on the other hand, are available as needed and charge a transaction fee for the work performed. However, some of them also only work when they need to, which can be frustrating.

There may also be a cash-flow advantage to working with vendors. Vendor payments tend to be less frequent than payroll (another benefit for smaller CRAs, which tend to keep less cash on hand).

Finally, vendors may assume some of the legal risk from a CRA — or, at least, share the risk if a lawsuit occurs.

The cons of vendor management for CRAs

Managing a network of regional vendors may have been the most common form of data supply chain leading into the 2020’s, but the approach has several downsides. Chief among them is that overseeing a CRA’s relationship with a hundred different vendors is no easy task and consumes time that could be spent growing the CRA instead of keeping it running.

As InformData Chief Operating Officer Bill Wilder (a veteran operations leader in the employment background screening industry who leads the development of InformData's verifications suite) pointed out in a recent webinar:

“It is really difficult to build a good vendor management competency. I think a lot of people think it's simpler than it is to manage vendors effectively, getting the most out of them, making sure that they're driving to a better outcome…For example, if a vendor has found a better way of performing a process, would they tell you? Why would they tell you if it hurts their profit?”

Another challenge with utilizing a vendor network is a lack of consistency from vendor to vendor in how data is reported.

For example, what one vendor reports as a DUI, another vendor may report as a DWI. “And now you have to spend time, money, and systems to get it to all look the same so that when your client gets ahold of the report, it doesn't look so disjointed,” Wilder said.

By adding layers inherent when using vendors also multiplies the risk of security breaches, especially since CRAs have very little control over their vendors’ subcontractors.

Some CRAs find a place in their data supply chain for their own research teams staffed by salaried “W-2” employees.

The pros of W-2 employees for CRAs

The primary advantage of W-2 employees is complete control over how the work is done and in what priority.

With salaried background screening researchers, Wilder said, “If you want to do customize your research processes, you can do it…There's dedicated bandwidth, so you're never standing in line behind some other CRA’s orders.”

A team of W-2 employees makes the most sense for CRAs that do most of their work in one or two counties. If your CRA can be focused as a boutique shop, using W-2 research teams to create and maintain your data supply chain may be advantageous.

The cons of W-2 employees for CRAs

As with a network of vendors, W-2 employees do not manage or organize themselves. A large workforce brings massive infrastructure costs — not just for payroll but for systems, training, and recruitment. The current “war for talent” may be a boon to the background screening industry, but it does not make it easy to attract and retain qualified personnel.

Other administrative and financial headaches that come with W-2 employees include:

Wilder also pointed out that relying entirely on W-2 employees can slow a CRA’s process and technological development:

“If there’s some new innovation coming out in the industry, it’s up to you to develop it. Versus, if you’re with a nationwide partner, those people are making the R&D investment for you. So, if there is a better way to solve a problem, your partners would be taking on that cost and burden.”

Nationwide direct-source providers such as InformData put CRAs (and their end-users) as close to the original criminal record data as W-2 research teams (without the hassle or risk of managing the resource).

The pros of nationwide direct-source data providers for CRAs

The obvious benefit of partnering with a nationwide direct-source data provider is that it erases many of the frustrations and complications of managing a vast vendor network or supervising teams of salaried researchers. Rather than working through a network of potentially hundreds of vendors, CRAs can partner with a single provider covering the entire United States.

Along with the simplicity of vendor consolidation, the benefits of this approach include:

“If you can get to as small a number of steps to the direct source as possible, then you have a higher probability of executing the customization,” he said.

Partnering with a nationwide direct-source data provider also allows for greater transparency than a vendor network, as well as more predictable costs. InformData offers flat-rate pricing across a wide body of jurisdictions, enabling CRAs to pay for data the same way they charge for it.

The cons of nationwide direct-source data providers for CRAs

Admittedly, CRAs may have a few concerns about relying heavily on a single nationwide direct-source data provider.

For example, if the provider goes out of business, unexpectedly raises its prices, or the quality of the work declines, CRAs may be unable to shift their orders to other vendors quickly. This is why CRAs should seek out direct-source data providers that are built for longevity, with proven track records and good reputations.

CRAs may also wonder if they can get their orders to the front of the line when needed to avoid backlogs. This is possible with InformData, which will work with CRAs to optimize throughput during crunch periods.

“There isn’t a silver bullet,” Wilder told the webinar attendees. “I’d love to say, ‘This is the right answer for everybody,’ but that’s not the truth. As a CRA, you have to step back, think through your supply chain, and think about the core competencies you’re going to have to build to be successful.”

Direct-source data may not fit every CRA’s business model. Each CRA must design the data supply chain that works for their organization (and their end-users). Direct-source data is simply a new — albeit powerful — tool available to help CRAs access the timely and actionable people data they need to serve their end-users, compete, and grow their businesses.

While partnering with a nationwide direct-source data provider may seem risky, CRAs must weigh its many benefits against the apparent risk. And, of course, it’s always a good idea to take any data supplier for a test drive before committing to a closer relationship.

Click here to schedule a demonstration of what InformData’s direct-source data can do for your CRA. 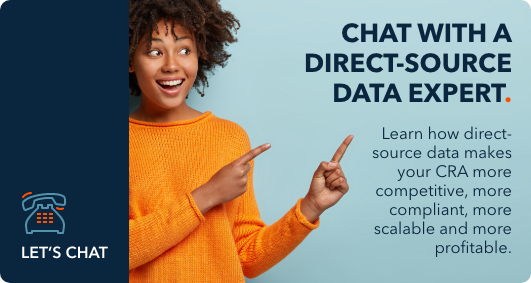 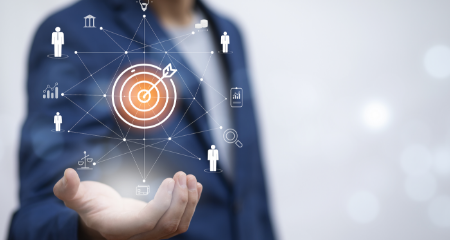 InformData Gets You Closer to the Data. What Does That Mean, Anyway?

Expanded Capacity in Arizona: Direct-Source Data at Your Fingertips